From Abraham to Jesus

Travelling exhibition, various venues across the USA - September 2006 - March 2007
The exhibition presented a thematic selection of artifacts from the Institute of Archaeology's Collections. The general concept highlighted the chronological continuum from biblical times until the first centuries CE, offering visitors a unique experience on their journey through the history and heritage of the Holy Land. This theme generated great interest among both Christian and Jewish communities in the United States. Five focal points served as "stations" along the road from Abraham to Jesus. Each opened a window into a specific historical and cultural world, affording a glimpse into daily life through the display of authentic artifacts from the various periods and relevant quotations from the Hebrew Bible and New Testament.

The Patriarchs: Fathers of All Nations
The background of the biblical stories about the Patriarchs - Abraham, Isaac, and Jacob - corresponds with the reality recorded in Mesopotamian documents dating to the second millennium BCE.
Abraham's journey from Ur of the Chaldeans through Haran and, finally, to Canaan traces the actual caravan routes used between Babylon and Canaan. Moreover, these stories reflect the daily life of the semi-nomads who traveled between the cities of Canaan (Shechem, Hebron) and the inhabitants living on their outskirts.
From Nomadism to Monarchy
The fascinating story of Joseph, who went down to Egypt and gained renown in Pharaoh's court, is recounted in the Bible in riveting detail. Egypt is presented through biblical texts and artifacts, including cultic and funerary objects, as well as alabaster and pottery vessels.
Kings, Priests, and Prophets
Although the Hebrew Bible is the main source for the study of this period, there is also significant extrabiblical material, including archaeological finds and epigraphical remains. Interestingly, the bulk of the material culture from Judah and Israel comprises artifacts from daily life.
The monarchy, which fulfilled the role of political and diplomatic leadership, evolved from the earlier tribal organization. This section featured typical Israelite pottery vessels and figurines, "LMLK" jar handles, personal seals in Hebrew, a selection of the famous Samaria ivories, and a copy of the Mesha stele dating from the 9th century BCE.
Confrontation with Greek and Hellenistic Civilizations
The Hasmonean state emerged in a political vacuum that had been created owing to the fall of the great powers in the East and the rise of Rome. Alexander the Great's conquest of the East in 332 BCE brought changes and upheavals to the region. Greek culture and language now penetrated various parts of ancient Israel, exposing the indigenous population to foreign institutions, customs, and lifestyles. Artifacts in the exhibition included Persian banquet ware, Hellenistic oil lamps, core-made glass, pottery containers for fine liquids, a Greek amphora, and coins of Alexander the Great and the Hasmonean rulers.
The Power of Rome and the Birth of Christianity
Pompey's conquest of Jerusalem in 63 BCE marked the end of the 80-year period of Hasmonean sovereignty in Judaea. King Herod's rule over ancient Israel left a considerable amount of material finds; especially interesting are artifacts from Masada and the Judaean Desert, such as an authentic leather sandal, a wooden comb, and ossuaries bearing Greek and Aramaic inscriptions, one of which probably belonged to Alexander son of Simon of Cyrene, who is mentioned in the New Testament.
The exhibition also featured fragments of the Dead Sea scrolls initially discovered in the Qumran caves along the northern shore of the Dead Sea. These documents have become a major source for the study of early Christianity, which emerged and developed from Judaism and other groups close to the Dead Sea sect. 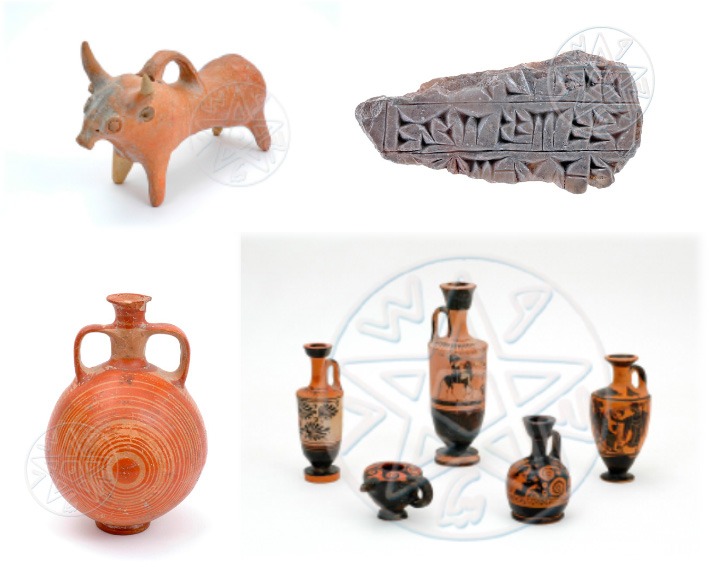