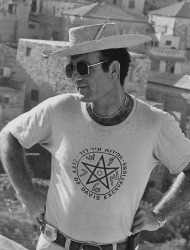 Yigal Shiloh was born in Haifa in 1937. After completing his high school education there at a trade school, he joined Kibbutz Hulata and served in the army as a paratrooper. In 1960 he began his studies of archaeology and Jewish history at the Hebrew University of Jerusalem, obtaining his B.A. in 1965 and his M.A. in 1969, both summa cum laude. In 1975 he was awarded his Ph.D. for his thesis on 'Foreign Influence on the Masonry of Palestine in the Tenth and Ninth Centuries B.C.' He started his career at the Institute of Archaeology, the Hebrew University, in 1964 as an assistant and instructor. In 1975 he was appointed Lecturer and in 1978 Senior Lecturer. During this period, he also obtained several scholarships abroad and served as Visiting Lecturer at Harvard University (1975 1976), as Visiting Professor at the University of California at San-Diego (1980), and again as Visiting Scholar at Harvard University (1980-1981).

Shiloh's first experience as a field archaeologist was in 1961 with N. Avigad in the Judean Desert Caves. From then onwards, he participated in many excavations: at Ramat Raḥel with Y. Aharoni; at Arad, Tell Nagila and the Citadel of Jerusalem with Ruth Amiran; at Masada, Hazor and Megiddo with Yigael Yadin. In 1978 he was appointed Director of the City of David Archaeological Project, thus becoming responsible for the excavation, restoration and preservation of biblical Jerusalem. Here Shiloh displayed his ability not only as a field archaeologist working on a topigraphically and stratigraphically difficult site, but also as an administrator and educator. He showed courageous leadership and determination in withstanding the pressure of religious fanatics who objected to the excavation of certain areas of the City of David.

In 1982, Shiloh was appointed Associate Professor in archaeology at the Institute of Archaeology of the Hebrew University. From 1983 to 1986, Shiloh served as Head of the Institute, while in 1986-1987, he was Visiting Professor at Duke University, North Carolina. Shiloh's publications, both in Hebrew and English, are numerous. Many of his articles deal with the questions of ancient architecture in this country, and the City of David excavations. He was the author of two volumes of the Qedem series: The Proto-Aeolic Capital and Israelite Ashlar Masonry (Qedem 11, 1979), and Excavations at the City of David I (Qedem 19, 1984). In recognition of his contribution to the uncovering of Jerusalem's past, its intensive study and preservation, Yigal Shiloh was awarded the Jerusalem Prize in Archaeology by the Jerusalem Municipality shortly before his untimely death at the age of fifty.