The building occupied by the Institute of Archaeology on Mt. Scopus was constructed in three stages. The first part of the structure was built in 1936 and was used until the War of Independence as a students' club. The second stage, built onto the club a few years later, was the Museum of Jewish Antiquities. From the War of Independence onward the two buildings were unoccupied, until the return of the university to Mt. Scopus after the Six Days’ War of 1967. The two existing structures, which were adapted for their new role, were joined by a new building assigned primarily to teaching and intended to unite the three elements into one homogeneous unit.

The students' club was built by the celebrated Jewish architect Erich Mendelson. It is a rectangular structure with a simple terrace at its western end, from which at that time there was a view of Jerusalem. In agreement with Mendelson’s principles, the structure was adapted to the topographical conditions and blended in with its natural surroundings. Accordingly, the structure had a varying number of stories, two on the south and west and only one on the north and east, from which there were openings onto the square to the north.

While the building served as a students’ club, its ground floor contained a reading room, a smoking room, a teachers' room, a kitchen and lavatories. On the upper floor were a large hall opening onto the terrace, another teachers' room and a students' room. In the ceiling of the hall Mendelson left the joists exposed, to create a rhythmic tempo and a spacious feeling.

The Museum of Jewish Antiquities, as one can read to this day in copper letters on the stone wall near the entrance, was built on the initiative of Prof. Elazar Lipa Sukenik and named after Gdalya (Morris) Kutcher. It was built in order to “assemble within it all the different remains of the Jewish past, both from Eretz Israel and from the ancient lands of the Diaspora”, as Sukenik wrote in the monthly journal of the Association of Engineers and Architects.

Construction of the building was preceded by a competition between architects, whose results were announced in December 1939. The judges were the architect Erich Mendelson (who spent these years in Jerusalem, preparing the overall plan of the University and designing, among others, the Hadassah University Medical Center ), the architect Alexander Klein, and Zalman Schocken. The conditions of the competition explicitly stated that the main body of the museum was to be a continuation of the students’ club and linked with it architecturally. The winners of the competition were the architects Karl Rubin and J. Yavecz. Since both of these architects were closely associated with Erich Mendelson, the style of their design harmonized with the student’s club building and complemented it. The museum was inaugurated on 11 December 1941.

The Museum of Jewish Antiquities contains two floors and is entered from the east, from the direction of the road that at that time ran along the watershed of the mountain. The entrance is via a courtyard covered by a pergola formed from stone pillars; the courtyard was intended for the exhibition of archaeological artifacts. The building is preserved in its original state, apart from some internal changes and a few additions.

These two buildings were among the first on Mt. Scopus to be returned to use after the Six Days’ War, when in 1970 the Institute of Archaeology relinquished its fine building on the Givat Ram campus and returned to Mt. Scopus.   The two existing buildings were assigned to the research activities of the Institute, and for its teaching needs the design of a new wing, to the east of the existing buildings, was commissioned from the Tel Aviv architect Yitzhak Yashar, one of the most distinguished architects active in Israel at that time. The new building has four stories graded in accordance with the topography and has terraces on the west, like the students’ club. In the original plan, the basement level holds laboratories, the ground floor with the south-facing entrance contains lecture halls, the intermediate floor houses the library, seminar rooms and slide archive, and the top floor contains teachers’ and administrative offices.

The new wing was inaugurated in 1972. It differs in style from the two older wings, being constructed from sawn stone rather than dressed Jerusalem stone. It is distinguished by projecting elements connected with some of the structure’s windows. In the entire exterior, there is harmony between the three wings, though this is not expressed in their interior organization.

In 2003, changes were made in the “new” wing that involved the doubling in size of the Institute’s library (partly at the expense of one of the terraces) and the extension of the top floor to include the slide archive. The changes were carried out by architects Gavriel Kertesz and Aviva Silbert. 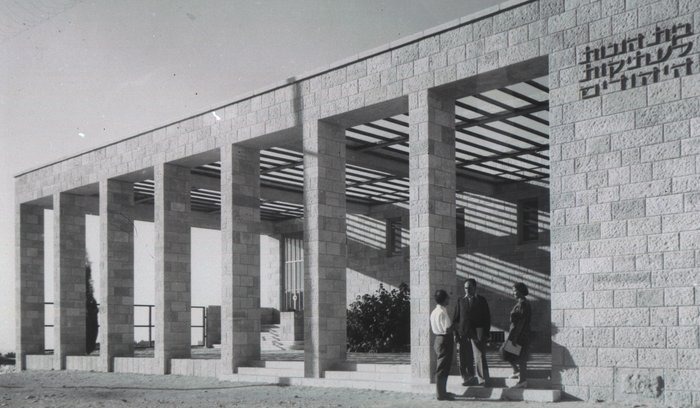