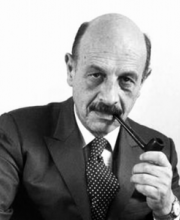 Yigael Yadin was born in Jerusalem in 1917, the son of E.L. Sukenik, one of the first Jewish archaeologists, and Hasya Sukenik, pioneer in pre-school education. Yadin graduated from the Gymnasia high school in 1934 and began his studies in archaeology and Semitic languages at the Hebrew University of Jerusalem. From his high school days he was active in the Haganah under the code name of Yadin, and thus did not complete his M.A., which was in the subject of Arabic epigraphy under the supervision of L.A. Mayer, until 1945. His earliest articles, which appeared in Hebrew in 1944 and English in 1947 under the name Yigael Sukenik, dealt with aspects of Semitic philology, archaeology and military matters. It was the latter subject that caught his attention; problems of military strategy, fortification and the art of warfare in the biblical lands became of prime interest to him and he used his knowledge of the land and its geography to great effect during the War of Independence. Yadin served as head of the Israeli delegation to the armistice negotiations on Rhodes at the conclusion of the war. His military career culminated with his appointment as Chief of Staff of the Israel Defence Forces in 1949. Many of the features that characterize the organization of the I.D.F. and its development into an integrated modern army stem from this period.

After leaving the I.D.F. in 1952, Yadin returned to academic life. He played an important role in the acquisition of the scrolls from Qumran Cave I that had been taken to the United States by the Metropolitan of the Syrian Orthodox monastery in Jerusalem. In 1955 he earned his Ph.D. for his thesis on The War of the Sons of Light against the Sons of Darkness. In this work his knowledge of Hellenistic and Roman military tactics was put to excellent use, and the many other aspects of this scroll were thoroughly examined. The Hebrew version was published in 1955 and the English in 1962. With Nahman Avigad he published in 1956 the first edition of the Genesis Apocryphon from Qumran Cave I. A popular work on the scrolls, entitled The Message of the Scrolls, appeared in English and Hebrew in 1957. The publication of various fragments of the scrolls and a series of articles dealing with diverse aspects of Qumran studies testify to an abiding interest in this subject, as exemplified by the article on the Masada fragment of the Qumran Songs of the Sabbath Sacrifice.

Yadin was appointed Research Fellow at the Hebrew University of Jerusalem in 1953 and Senior Lecturer in 1955. He was promoted to Associate Professor in 1959 and to Professor in 1963; he served as Head of the Department of Archaeology and subsequently, when the Institute of Archaeology was founded, as its Head.

In 1956 he directed his first excavation at the major site of Hazor. It was the first large-scale excavation of this kind in Israel and many of those who were to become Israel's leading archaeologists in the ensuing years participated in this and subsequent seasons (1956–1958). He returned to Hazor in 1968-1969 to explore further aspects of the site. In collaboration with his colleagues in the excavation he published Hazor Vols. I–II and the plates of Vols. III–IV (1958–1961); the text of Vols. III-IV is expected posthumously. The results of the excavations were presented as the Schweich Lectures in 1970, which were published in 1972 as Hazor, the Head of All Those Kingdoms. He also excavated at Megiddo at various times during the years 1960-1971.

During 1961 and 1962 Yadin led the expeditions that examined a series of caves in the Dead Sea area. In a cave in Nahal Hever, letters and documents from the period of Bar-Kokhba were discovered. The most dramatic of these are the letters and orders issued in the name of Shimeon bar Kosiba, but of equal importance are the documents in Hebrew, Aramaic, Nabatean and Greek that comprise the archive of Babata. The material was published in Finds from the Bar-Kokhba Period in the Cave of Letters (Hebrew and English 1963); a popular book, Bar-Kokhba, appeared in 1971. The Art of Warfare in Biblical Lands in the Light of Archaeology appeared in Hebrew and English in 1963. It showed the writer to be a master of the subject, capable of synthesizing material from a wide area without losing sight of myriad details and at the same time offering new insights and interpretations of long-known artifacts and sources. In the years 1963-1965 Yadin turned to the mountain palace-

fortress of Masada and overcame with skill the many difficulties inherent in the excavation of such a site. Here his ability to assimilate new information and to utilize expertise available both in Israel and abroad came to the fore. Besides the popular book Masada, which appeared in a variety of languages, the publication of The Ben Sira Scroll from Masada (1965) reveals another aspect of Yadin's scholarly undertaking.

With the recovery of the Temple Scroll soon after the Six Day War in 1967, Yadin devoted his efforts to the decipherment and publication of this complex text. He had been called back to service in 1967 as military advisor to Prime Minister Levi Eshkol; in 1973–1974, in the aftermath of the Yom Kippur War, he served on the Agranat Commission of Inquiry. Despite this interruption, the Hebrew edition of The Temple Scroll appeared in 1977. The diversity of matters dealt with in this scroll is great, and Yadin's ability to approach new subjects and to master them stands out. His interpretation of many passages of the scroll and his view of the scroll as a whole aroused controversy. In 1977 Yadin entered politics, was elected to the Knesset and served as Deputy Prime Minister until 1981. The English translation of The Temple Scroll appeared in the spring of 1984; in this edition attention was paid to the issues raised by attentive scholars and critics.

In the spring of 1983 Yadin directed a short season of excavations at Tel Beth Shean with the purpose of examining the stratigraphy established by earlier excavators.

With the publication of the Temple Scroll in English, Yadin planned to complete preparation of the second volume of Finds from the Bar-Kokhba Period in the Cave of Letters, containing documents in Hebrew, Aramaic, Nabatean and Greek. The Yigael Yadin Memorial Fund has been established to promote publication of research in progress at the time of his death and to found a chair in archaeology at the Hebrew University of Jerusalem. Reports on the excavations at Beth Shean, Hazor, Masada and Megiddo will be published in the near future. A volume in the Eretz Israel series will be dedicated to his memory.

Over the years Yadin frequently lectured to learned societies, universities and community groups in many countries. He was an interesting and comprehensive lecturer, holding the constant attention of his audience. In 1969–1970 he served as Visiting Professor at Brown University and at Harvard Divinity School and lectured at other institutions in the United States. During the spring of 1984 he held a number of lectureships at institutions in the United States. Among the awards he received were the Israel Prize for Jewish Studies in 1956, the Rothschild Prize for the Humanities in 1964 and the Jabotinsky Prize for Literature in 1972. He received honorary doctorates from Brandeis University (1956), Hebrew Union College (1963), Witwatersrand University (1968) and Dropsie University (1969–1970). In 1964 he was elected a member of the Israel Academy of Sciences and Humanities; in 1965 a membre correspondant of the Académie des inscriptions et belles lettres; in 1966 a Corresponding Fellow of the British Academy; in 1967 an Honorary Member of the Society for Old Testament Study; and in 1973 an Honorary Member of the Society for Biblical Literature and an Honorary Fellow of the American Academy for Jewish Research. A Festchrift for Yigael Yadin appeared as an issue of the Journal of Jewish Studies (Vol. 33, Nos. 1-2, 1982); this contained a comprehensive bibliography up to 1980.

Yigael Yadin was gifted with an active intelligence, a swift grasp of facts and an excellent memory. His combinatory powers were prodigious and he possessed a rare talent for synthesis. He had a strong personality and often insisted on his views in the face of criticism; he was willing to put forward theories and interpretations even when he knew that they would not meet general acceptance. Those who studied under him remember him as a stimulating teacher whose lectures and seminars were remarkable for their depth and breadth. Those who knew him personally feel that a unique and irreplaceable individual who stamped his impression on Israeli life and scholarship has left us.