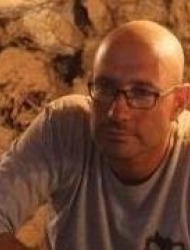 Lecturer in the Institute of Archaeology, Biblical Section. My research interests revolve around environmental and landscape archaeology, especially of marginal landscapes; field and analytical methods of archaeological surveys; regional archaeology of the Judean Desert; human activity in natural caves; and the development of complex societies around the transition to urbanism (Chalcolithic period and Early Bronze Age). My current studies include settlement dynamics in the Upper Galilee in the Early Bronze Age and early urbanization in the southern Levant, involving multi-annual excavations at the mega-site of Tel Qedesh; archeology and landscape of refuge in cliff caves of the Judean Desert during the Chalcolithic and Early Bronze Age; environmental and cultural changes in the Judean Desert during the Holocene (together with Dr. Nimrod Marom, University of Haifa); and comparative archaeology of ancient activity patterns in complex caves in the southern Levant.

I teach both mandatory and elective courses examining all periods studied within the Biblical Section, including the Late Neolithic, Chalcolithic, Bronze and Iron Ages, alongside courses dealing with environmental and landscape archaeology, survey methods and spatial analysis, and archaeology of marginal landscapes (deserts, caves). In 2019 I teach, among other courses, the BA seminar of the Biblical Section, revolving around the concepts of violence and conflict in the Ancient Near East; a course on the history and archaeology of the Judean Desert during the Roman and Byzantine periods (for students of the Classical Section); and an advanced course on archaeology of ancient human activity in complex caves.

Settlement Complexity and Upland-Lowland Interactions in Early South Levantine Urbanism: Tel Qedesh and the Galilee in the Early Bronze Age. The emergence of cities and urban lifeways were among the major changes in human history, and involved the reshaping of the social, economic, political and ideological matrix of ancient societies. The urbanization process has spatial and demographic aspects, which are related, among other things, to population concentration in large and central sites that are organized in new ways, alongside the creation of rural areas around them. The distribution of urban concepts from Mesopotamia, the cradle of urbanism in the ancient Near East, to other parts of the Fertile Crescent took on a variety of regional trajectories, whose unraveling has important implications for the comparative study of the dispersal of urbanism, its counter-reactions, and the ultimate change it conveyed to human societies. The proposed research is designed to re-address current hypotheses of Early Bronze Age (EBA; c. 3800-2500 BCE) urbanization processes through the study of settlement complexity in Northern Canaan, based on two complementary investigations: delineating the structural and socio-economic development of a recently-identified mega-site at Qedesh in the Upper Galilee, probably the largest 'urban' EBA site in the Southern Levant; and computational analysis, using advanced locational modeling, of EBA settlement patterns based on refined published datasets at a multi-regional level, along a west-east transect that samples three cultural landscapes (Northern Coastal Plain, Upper Galilee, Northern Jordan Valley). The study, supported by a research grant from the Israel Science Foundation (grant no. 1534/18, 2018-2023), includes the multi-annual excavations at the site of Qedesh, which began in 2016 together with Dr. Ido Wachtel and Roi Sabar.

Archaeology and Landscape of Refuge - The Judean Desert During the Chalcolithic and Early Bronze Age. The social significance of violent conflicts among pre-urban societies is a frequent theme in the archaeological discourse, pertaining to fundamental subjects such as the evolution of social stratification and accumulation of power. A common feature of past conflicts whose archaeological identification poses great methodological challenges is forced displacement, involving an uprooted social group commonly termed refugees, and the place which provides temporary shelter for that group, namely refuge. Refugee studies are well established in disciplines such as history, anthropology and political studies, but the archaeology of refuge is undeveloped, with the exception of few historical case-studies. The present study entails the examination of a unique case study – the hardly-accessible cliff caves of the Judean Desert - through comparative analyses of environmental, structural and material aspects as possible proxies for the identification of temporary refuge episodes in those caves in two periods, the Late Chalcolithic period (c. 4200-3800 BCE) and the early EBA Ib (c. 3300-3150 BCE). The research emphasizes the advantages, as well as the methodological and interpretive complications, of the archaeological work in marginal landscapes and in the identification of hidden human behaviors.

Environmental and Cultural Changes in the Judean Desert during the Holocene. In the years to come, I will continue to study human-environment relations in the Judean Desert as part of a new program led by Dr. Nimrod Marom of the University of Haifa and funded by the European Research Council (ERC, grant no. 802752). The study focuses on the changes in the regional ecosystem in relation to periods of prosperity and decline in human activity in the En Gedi Oasis, through relative abundance of predators (leopards) and game in the regional food chain. This study includes the collection and analysis of biological data from a variety of caves in the southern Judean Desert, alongside detailed archaeological-environmental research at main foci of human activity in En Gedi and its environs from three main periods - Chalcolithic, Iron Age and Roman-Byzantine.

Activity Patterns of Early Complex Societies in Composite Caves in the Southern Levant: The archaeology of natural caves around the globe is usually associated with the study of hunter-gatherer societies. Nevertheless, caves continued to form an integral part of human landscapes well after the Neolithic revolutions. With the advent of complex, sedentary societies, human activity patterns in the subterranean sphere changed dramatically. While large, composite karstic caves were apparently not used for permanent habitation, they offered potential localities for diverse off-settlement activities, including mortuary, ritual and refuge. The major contribution of the study of natural caves under the realm of early complex societies thus lays in the opportunity to identify and analyze behavioral patterns which cannot be easily recognized in settlement sites. The highlands of the Southern Levant, from the Upper Galilee to the Northern Negev, are built of a thick sequence of Late Cretaceous sedimentary rocks and host numerous karstic caves. Since the late 1970’s these caves are studied by the Israel Cave Research Center (ICRC, Institute of Earth Sciences, HU), which discovered and documented numerous composite caves containing archaeological remains dated to the late prehistoric sequence (Late Neolithic – Early Bronze Age), but only a handful were systematically studied in the past (e.g. Nahal Qanah Cave). During the last ten years, as part of an interdisciplinary research group comprised of archaeologists and environmentalists (including Prof. A. Frumkin, Prof. B. Zissu [Bar-Ilan University], Roi Porat, Boaz Langford and Micka Ullman), we conducted systematic surveys and excavations in composite caves in various hilly regions, and in the coming years I will focus (together with Micka Ullman) on a comparative analysis of the finds from these caves, including chronological, spatial and cognitive aspects of human activity in Levantine composite caves.

Micka Ullman (PhD): Activity Patterns of Early Complex Societies in Composite Caves in the Southern Levant (together with Prof. A. Frumkin)