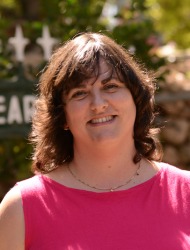 Broadly speaking, her research focuses on intercultural interactions between the Roman and Late Antique Eastern Mediterranean, particularly the Levant, and the broader Mediterranean world. Based in the study of archaeology and material culture, her work draws upon several related disciplines, including history of art, social, cultural and economic history, Jewish studies, and anthropology. Her research interests include domestic architecture and domesticity, urban planning and development, mosaic art, Jewish and Christian cultural connectivity, as well as material expressions of cult and religion.

Her doctoral dissertation, Luxury, Prestige and Grandeur: The Mansions and Daily Life of the Social Elite of Judaea-Palestine during the 1st c. BCE-6th c. CE, was a study of mansions and elite domestic practices in the southern Levant, using architectural and decorative analyses to address topics of social history from the domestic perspective, allowing for a comparative study of the local elites in relation to peers throughout the Mediterranean basin.

Her current project, under the auspices of Z. Weiss’ research funded by the Israel Science Foundation, focuses on the Christianization of the cities of the Galilee, particularly from the perspective of the transformations of urban space in the Jewish-majority cities of Sepphoris and Tiberias. She concurrently working on the preparation of the final report of Y. Hirschfeld’s excavations at Tiberias, including finds spanning the entire first millennium CE.

Assistant instructor – Introduction to Greek and to Roman Archaeology. Instructor – A Matter of Routine: Daily Life in Pompeii, Herculaneum and Ostia.

Miller, S. and Leibner, U. 2018. “The Synagogue Mosaics,” in: U. Leibner (ed.) Khirbet Wadi Ḥamam: A Roman-Period Village and Synagogue in the Lower Galilee, Qedem Reports 13 (Jerusalem: The Institute of Archaeology, the Hebrew University of Jerusalem), 144-186.

Miller, S. 2017. “Markers of Pagan Cults in a Jewish City: Rethinking the Hadrianeum of Tiberias” in: O. Tal and Z. Weiss (eds.) Expressions of Cult in the Southern Levant in the Greco-Roman Period: Manifestations in Text and Material Culture, (Turnhout: Brepols), 95-107.

Miller, S. 2016. “The Urban Plan of Tiberias from its Foundation until the Islamic Conquest in Light of New Discoveries,” in: J. Patrich, O. Peleg-Barkat, and E. Ben-Yosef (eds.) Arise, Walk the Land – Studies in the Archaeology and History of the Land of Israel in Memory of Yizhar Hirschfeld at the Tenth Anniversary of his Demise. (Jerusalem: Israel Exploration Society), 221-232, 255* (Hebrew with an English abstract).