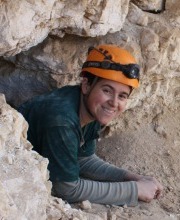 Phd thesis topic: “Human selection and exploitation patterns of complex karstic caves during the later prehistory of the southern Levant”

Abstract: From the dawn of prehistory, humans made use of natural caves for various purposes. In the southern Levant, occupation of caves began during the mid-Lower Paleolithic (ca. 600 ka) and increased during the Middle Paleolithic (ca. 250-50 ka). Paleolithic selection preferences of cave sites focused on large, spacious, well-lit and ventilated chambers with large openings. Groups of gatherers-hunters used those sites for a range of domestic activities, such as daily group gatherings, food preparation and consumption, and tool making. At times, the same sites were also used for mortuary purposes, probably in between occupation phases.

During the Pottery Neolithic period (from ca. 6,500 BCE onward), as a result of the revolutionary changes associated with the transition to sedentary ;lifeways and food production (agriculture and animal husbandry), a shift can be observed in cave use patterns. Alongside a continuation in exploiting large, relatively open chambers, for the first time in the Levant humans began to penetrate into deep and complex caves, which are difficult to negotiate through, challenging for orientation and navigation, completely dark and damp, and often presenting a variety of remarkable natural phenomena, such as stalagmites and stalactites. Preliminary study of the archaeological finds from several complex caves in the southern Levant indicates that during certain time-spans within the 7th-3rd millennia BCE (spanning the Pottery Neolithic, Chalcolithic and Early Bronze Age periods), the depths of complex karstic caves were used for multiple activities, at least some of which are related to ritual and burial.

The present research revolves around the interactions between humans and their natural landscape during the emergence of early complex societies, as can be deciphered from the study of human exploitation patterns of complex karstic caves. Karstic caves are abundant in most highland regions of the southern Levant, and dozens of them reach a total length exceeding 300 m. Many of these caves were recently explored by the Israeli Cave Research Center (ICRC), Institute of Earth Sciences, the Hebrew University, and archaeological finds from the Neolithic, Chalcolithic and Early Bronze Age periods surfaced in numerous such caves, however these are yet to be thoroughly studied. The present research will focus on the comparative analysis of cave use patterns from the aforementioned periods, including regional distribution of complex caves, spatial distribution of artifacts and ecofacts within them, and analysis of material culture remains and their context of deposition. In addition, the environmental aspects of the caves and their surrounding landscape will be explored, and Holocene geological and geomorphological processes inside the caves will be inspected. This will allow discussing human selection and exploitation patterns of complex caves during the later prehistory of the Levant, in relation to the emergence of complex societies, as well as detecting trends of continuity and change in these patterns. The uniqueness of this research is drawn from its focus on the remains of ancient human activities that took place outside the settlement sites, and the possibility to shed light on little-known aspects of social interactions and worldviews.