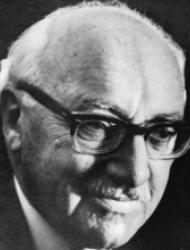 Avi-Yonah was born on 26 September 1904 in Lemberg, Galicia, then part of the Austro-Hungarian Empire. His father, a lawyer, was a liberal assimilated Jew and later an enthusiastic Zionist. Avi-Yonah grew up in a German-oriented, middle class home in which special interest was maintained for painting, sculpture and music. In 1919 he emigrated with his parents to Palestine and in 1921 settled in Jerusalem, where in 1923 he completed his secondary education at the Hebrew Gymnasium. From 1925 to 1928 he studied classical archaeology and history at the University of London for the degree of Bachelor of Arts; it was there that he received his Master of Arts degree in 1943 and Doctor of Philosophy in 1958. As a student at the British School of Archaeology, Jerusalem, from 1928 to 1931, he participated in the excavations at Tel Sharuḥen and the Ophel. In 1931 he joined the Department of Antiquities of the Government of Palestine, where he served as Assistant Librarian and Records Officer until 1948. Avi-Yonah was in charge of the scientific archives ('Records') and introduced a practical and efficient system of recording ancient sites and monuments. He also devoted much time and energy to copy-editing, and later editing, the fourteen volumes of the Quarterly of the Department of Antiquities in Palestine.

From 1948 to 1953 Avi-Yonah was Research Secretary of the newly-founded Israel Department of Antiquities. In 1949 he was appointed external teacher for Byzantine archaeology and historical geography at the Hebrew University of Jerusalem. A major turning point in Avi-Yonah's career occurred in the autumn of 1953 when he joined the Department of Archaeology of the Hebrew University as Lecturer in Byzantine archaeology and historical geography; he was appointed Associate Professor in classical and Byzantine archaeology in 1958 and Professor in 1963. Avi-Yonah was Visiting Lecturer at Dropsie College, Philadelphia, in 1953, and Visiting Professor at the University of Rome in 1961. He was awarded the Bialik Prize in 1955, the Ben Zvi Prize in 1971 and the Kadman Prize in 1973.

Avi-Yonah's first publication was the article, 'Three Lead Coffins from Palestine', which appeared in 1930. This study inaugurated forty-four years of creative and highly productive writing, which combined original thinking with a special gift for a broad and sound synthesis. With Eretz-Israel in the foreground of his interests and with his far-ranging, almost universal, knowledge of the classical and Byzantine civilizations, Avi-Yonah contributed important studies in many fields.

First and foremost was his deep interest in ancient art, which led to his studies on the mosaic pavements in Palestine (1932-1934) and lead coffins from Palestine (1935). These and several additional studies, mainly on mosaic pavements, focused his attention on the re-emergence of the oriental civilizations in the art of the late Hellenistic, Roman and Byzantine periods. This re-emergence, in the period of the struggle for the creation and survival of the State of Israel, probably had a very special meaning for one who, though not an orthodox Jew, was a dedicated Zionist. Avi-Yonah's studies Oriental Elements in the Art of Palestine in the Roman and Byzantine Periods', (1944-1950) were of major importance in this field; these were followed in 1961 by his classic synthesis of the subject, Oriental Art in Roman Palestine. For the Hebrew-reading public he wrote the first and only general book in that language on classical art: A History of Classical Art (1969). Many of his studies were also dedicated to ancient Jewish art.

The geographical history of Palestine in the Hellenistic, Roman and Byzantine periods remained one of Avi-Yonah's main fields of interest throughout his entire academic career. To this field he contributed the Map of Roman Palestine (1935, 1940) and the general study Geographical History of Eretz-Israel (first published in Hebrew in 1949, with several later editions, and re-published in English as The Holy Land in 1967). Other contributions to this area of study included a modern edition of The Madaba Mosaic Map (1954) as well as numerous atlases and articles. The history of the Jewish people in Palestine from after the Bar Kokhba Revolt to the end of the Byzantine period is presented

in his book, In the Days of Rome and Byzantium (first published in Hebrew in 1946 and published in German in 1962).

As early as 1932 Avi-Yonah published (together with L.A. Mayer) a concise bibliography of excavations in Jerusalem. The study of the topographical history of Jerusalem attracted his attention; he wrote numerous studies on its problems and edited the monumental first volume of The Book of Jerusalem (1955). With special joy he thus accepted the project of planning and guiding the construction of the 1:50 scale model of Jerusalem in the last century before the destruction of the Second Temple. (This model stands on the grounds of the Israel Museum in Jerusalem.)

Avi-Yonah's thorough knowledge of Greek and Latin enabled him to maintain a keen interest in classical epigraphy. His contributions to this field include the Supplement to QDAP 9 (1940): Abbreviations in Greek Inscriptions (The Near East, 200 B.C. — A.D. 1100), and the publication of a large number of Greek and Latin inscriptions. The architectural remains of the Hellenistic, Roman and Byzantine periods in Israel were described by him in The Antiquities of Israel (published in Hebrew in 1955, with S. Yeivin and M. Stekelis). His own writing did not prevent him from publishing many reviews and editing various useful series on ancient art.

During the last year of his life he completed the article 'Palaestina' for the Pauly’s Realencyclopädie der classischen Altertumswissenschaft (published posthumously in 1974) and finished — in his very last days — the manuscript of a forthcoming book, The Hellenistic Age.

As a field archaeologist Avi-Yonah began his activities with the clearance of the synagogue of Husifa ('Isfiya) (together with N. Makhuly and N. Avigad) in 1932 and the excavation of a Roman cemetery near Nahariya in 1941. In 1949 and 1968 he excavated the installations of the Legio X Fretensis at Giv'at Ram, Jerusalem, and in 1956 and 1962 the synagogue of Caesarea. In 1945–1946 he excavated with M. Stekelis at Beth Yerah and in 1955 took part in the survey and first excavations of Masada.

Avi-Yonah's work on his own studies never hindered him from assisting his friends, colleagues and students. It is in this context that one must appreciate his editing the Israel Exploration Journal for more than two decades. As a teacher, his main objective was to develop his students' approach to the visual arts and to acquaint them with the achievements of western civilization. For these students he was a constant source of inspiration and encouragement.

Avi-Yonah was a member of the Government's Archaeological Advisory Board and the Government's Names Committee, from their inception, and for many years he served as a member of the Executive Committee of the Israel Exploration Society. It was he who in 1943 first suggested holding annual conventions of the Society for the general public, in order to foster and further the interest in the history and archaeology of Israel.

Avi-Yonah was a prominant member of the generation of Jewish Zionist students of ancient Palestine who combined deep roots in western culture with the belief in the role and contribution to be made by Israeli scholars in these fields.

Those who knew Avi-Yonah personally will cherish his memory—his fairness, warmth and inexhaustable wit and humour.