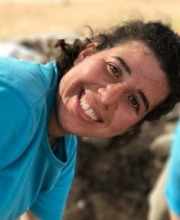 PhD research: My PhD-research deals with the ways in which food was produced, stored and consumed within domestic structures in Roman Palestine, using an interdisciplinary approach which examines the material remains unearthed in archeological excavations and compares them to the information embedded in Rabbinic literature.  The juxtaposition of archeological finds with Rabbinic literature not only deepens our understanding of both types of evidence, but also enables an insight into the daily life, the social structures and the cultural connections of the population of Roman Palestine in the first few centuries CE.

Already in my MA-thesis did I explore the relations between the archeological record and written sources. I analyzed a number of components, that were usual features of Roman-period domestic dwellings in Palestine, either within the houses themselves or in their courtyards: an underground storage unit called ""דות ("dut"), cisterns, walls, door frames ( thresholds, lintels and doorposts), as well as doors and different locking mechanisms. The thesis was written under the supervision of Prof. Uzi Leibner.