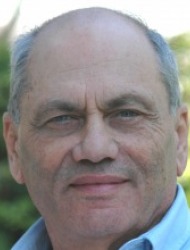 “Professor Ephraim Stern, Chair of the Board of Directors of Israel Exploration Society and one of Israel’s most outstanding archaeologists – a researcher, teacher, colleague and loyal friend – passed away on 23 March 2018, at the age of 84.

Born in Haifa in 1934, Ephraim studied at the Hebrew Reali School. He then served in the Israeli army attaining the rank of officer and of major in the reserves.  Upon completion of this military service he studied archaeology and Jewish history at the Hebrew University of Jerusalem, earning B.A. and M.A. degrees.  He wrote his Ph.D. dissertation on the Persian period in the Land of Israel under the supervision of Prof. Benjamin Mazar. Ephraim’s doctoral thesis was and remains a substantial scientific contribution. At the time, the Persian period was not at the forefront of archaeological research in the Land of Israel and its importance was largely unrecognized. Ephraim’s significant study, in which he assembled, analyzed and summarized the data and the finds, changed this. His dissertation was published as a book, first in Hebrew and then in English (Material Culture of the Land of the Bible in the Persian Period 538-322 B.C., Warminster 1982), and was awarded the Izhak Ben-Zvi Prize.

Ephraim Stern was the first scholar to note the continuity of material culture between the Iron Age and the Persian period. Among his conclusions I shall mention the dating of the so-called lion seal impressions stamped on many jar handles found in the region of Judah.  Ephraim dated them to the earlier part of the Persian period (see his paper in BASOR 202 [1971]: 6-16) – a chronological conclusion that, in my view, firmly holds to this day, despite recent challenges based upon new excavations.

After completion of his studies Ephraim worked for some time as a staff member and then as illustrations editor of the Hebrew Encyclopaedia Biblica. He was one of the first teachers at the Department of Ancient Near Eastern Studies of the newly founded Tel Aviv University. Eventually, at the invitation of Prof. Yigael Yadin, Ephraim joined the academic staff of the newly established Institute of Archaeology of the Hebrew University of Jerusalem, where he taught until his retirement in 2002, when he became Professor Emeritus. Ephraim has many students who now hold leading positions at the various Israeli archaeological institutions. For several years he served as the head of Institute of Archaeology of the Hebrew University of Jerusalem.

Ephraim dedicated much of his time and energy to archaeological excavations. As a student he joined excavations at Hazor, which became the providing ground for what developed into an Israeli school of archaeological excavation. In cooperation with Prof. Itzhak Beit-Arieh, he excavated Tel Kedesh in the Jezereel Valley on behalf of Tel Aviv University. He later excavated in Tel Mevorakh in the Sharon Plain on behalf of the Hebrew University of Jerusalem. Extensive reports of these excavations were published in due course. While a graduate student, Ephraim joined the excavations directed by Prof. Benjamin Mazar at ‘En Gedi, where he excavated the remains of the Persian period. Many years later, after Prof. Mazar’s death, Ephraim completed the final excavation report for publication, and thus the ‘En Gedi excavations reached its fitting conclusion (‘En Gedi Excavations I. Final Report, Jerusalem, 2007).

The culmination if Ephraim Stern’s excavations was undoubtedly the impressive project he initiated at Tel Dor in the Sharon Plain. This is the site of ancient Dor, situated on the Mediterranean coast, one of the cardinal sites from the biblical and later periods in the Land of Israel. Here Ephraim led a systematic large-scale excavation project from 1980-2000. Upon his retirement Ephraim wisely and generously transferred the directorship of the excavation project to his students, believing that the excavation should be continued under the aegis of the archaeologists of the younger generation. A popular book on Dor and its excavation was published by Ephraim in Hebrew and English (Dor – Ruler of the Seas, Jerusalem, 2000).

The work at Tel Dor led Ephraim to investigate the settlement of the Sea Peoples in the northern part of the country, Assyrian domination in the Land of Israel and Phoenician culture, which in the first millennium BCE spread to the lands bordering the Mediterranean. Ephraim’s book on the Northern Sea Peoples was published a few years ago (The Material Culture of the Northern Sea Peoples in Israel, Winona Lake IN, 2013), and a comprehensive book on the Phoenicians was nearing completion at the time of his death.

Over the course of half a century Ephraim published a great number of books and papers related to the archaeology of the Land of Israel, a few of which are cited above. Noteworthy is his paper summarizing the material culture of the Land of Israel in the iron Age, which delineates the distinct developments in different parts of the country (published in BA 38 [1975]), and his comprehensive book on the Assyrian, Babylonian and Persian periods (published in 2001 by Doubleday as part of the Anchor Bible Reference Library). Following his retirement Ephraim vigorously continued his research and writing until the time of his death.  The New Encyclopedia of Archaeological Excavations in the Holy Land, published by Israel Exploration Society, is yet another cornerstone of Ephraim Stern’s life work. Ephraim was the main editor and the living spirit behind this significant project, which is extensively used by researchers and students worldwide. The NEAEHL was published in four volumes, in Hebrew (1992) and English (1993). A fifth, supplementary, volume in English appeared in 2008.

In 1968 Prof. Yigael Yadin and Joseph Aviram initiated the publication of Qadmoniot, a popular journal in the Hebrew language dedicated to archaeology and ancient history of the Land of Israel. Yadin was the first editor, and Ephraim Stern served as deputy editor from the first issue. In 1978 Ephraim became the editor and with the exception of five years (1994-1998) continued to edit the journal until his passing. Qadmoniot has become the main Hebrew-language archaeological journal, and its high standards are largely due to Ephraim’s dedicated and excellent editorial work.

Over the years Ephraim’s archaeological work received due recognition. On the occasion of his 75th birthday, Vol. 29 of Israel Exploration Society’s Eretz-Israel series was published in his honour. This volume includes papers written in Hebrew and English by Ephraim’s colleagues and students in Israel and abroad. In the course of his long career Ephraim received several prized and awards in recognition of his achievements. In addition to the Izhak Ben-Zvi Prize mentioned above, he was the recipient of the Percia Schimmel Award of the Israel Museum and the prestigious Emet Prize, awarded in coordination with the Prime Minister’s Office in Israel.

I have known Ephraim Stern and followed his scientific and public endeavors and his scholarly achievements for over sixty years. Throughout this period I marvelled at his ability to sensibly and fairly balance his work and activities, avoiding the pitfalls of the bitter quarrels from which the academic world often suffers. He had no enemies, and his honest, pleasant and friendly character was praised by all.

Ephraim is survived by Tami, his devoted wife and life companion, mother of his two sons. Tami was supportive of Ephraim’s work, significantly contributing to his achievements and success over the years, no the mention to his quality of life.

The passing of Ephraim Stern leaves a void that will not be easily filled. We shall miss his as a researcher, colleague and loyal friend. May his memory be blessed. “