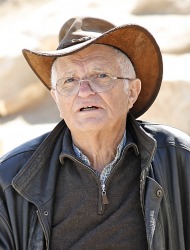 Born in Jerusalem in 1934, Ehud studied architecture at the Technion in Haifa, receiving his M.A. degree in 1959. In 1970, after several years of work as a free lance architect, specialising in the restoration of ancient sites and the rehabilitation of old neighborhoods, he became the resident architect of the Institute of Archaeology at the Hebrew University of Jerusalem. His Ph.D. dissertation, completed in 1978 under the guidance of Professor Yigael Yadin, was titled 'An Architectural and Archaeological Analysis of the Building in the Herodian Period at Herodium and Jericho'.

In 1980, Ehud became a permanent faculty member at the Institute of Archaeology of the Hebrew University, working as teacher, excavator, architect and researcher until his retirement in 2002.

His training in both architecture and archaeology stood him in good stead, and he proved to be an excellent field archaeologist, who was responsible for the preservation and restoration of the finds from Masada and was involved in the development of several national parks and in the presentation of archaeological finds throughout the country to the general public. He conducted large-scale excavations at various Herodian sites, such as Masada, Jericho, Caesarea, Cypros and Herodium, as well as at smaller ones, for example, in Jerusalem, Caesarea, Banias and Sepphoris. He walked in Herod's foot steps, seeking to revive the monumental building projects in which this king had invested so much thought, great sums of money and tremendous efforts. As an excavation director, Ehud focused on details, but always managed to incorporate them into the broader picture, bearing in mind the need to present the finds to a wide audience. Equipped with the tools of his trade — a drawing board, graph paper, pencil and eraser — he meticulously sketched each and every stone and drew well-calculated lines to delineate walls and skillfully present the building's architectural plan; if necessary, he attached an isometric restoration, through which he was able to transform the silent find into a live monument. This is how Ehud pursued his work over the years, inspiring many of his students, who followed him to the desert and helped him uncover ancient remains, allowing him to focus, meticulously and methodically, on the completion of the architectural plans, searching for their meaning... as if he were building Herod's palaces from scratch.

Large halls, buildings and palaces were extremely important to Ehud, but above all, he wished to uncover Herod's monumental tomb at Herodium. In his quest, every unique stone uncovered in the dig, any hole in the ground, or other small detail revealed in the course of work bore with it the hope of uncovering Herod's tomb. In 2007 he fulfilled his life-long dream: he uncovered the remains of the king's monumental tomb along the mountain slope, together with few broken sarcophagi that were most probably reserved for other members of the royal family. After receiving worldwide renown for this discovery, Ehud continued excavations at the site, uncovering a small theatre with a special palatial room containing magnificent frescoes, which he was planning to present to the public.

Ehud, whose important studies of Hasmonean and Herodian sites were internationally acclaimed, published several books and excavation reports and numerous articles, all attesting to his range of in terests — Hasmonaean and Herodian architecture, Nabataean architecture, synagogues in ancient Palestine and the Diaspora, the Jerusalem Temple, and bath houses, to name but a few. His monumen tal volume on the architecture of Masada (Masada III, Jerusalem, 1991) provides a detailed study of each and every architectural unit at the site, while also presenting an overview of the palace from the days of Herod and its subsequent stages. His excavation reports of Herodium (Greater Herodium; Jerusalem, 1981), Caesarea (Excavations at Caesarea Maritima, 1975, 1976, 1979 — Final Report; co authored with Lee Levine, Jerusalem, 1986), and especially his volumes The Hasmonean and Herodian Palaces at Jericho (Jerusalem, 2001 and 2004), illuminated with his own drawings, meticulously present the various architectural phases and units at each of these sites.

Throughout his career, Ehud was in volved in the excavation and publication of several ancient synagogues, including ‘En Gedi, Susiya, Sepphoris and Jericho, as well as Saranda, the first synagogue ever to be excavated in Albania, which he was in the course of preparing for final publication. Three of his books were dedicated to the synthesis of the finds. His first, Die Paläste der Hasmonäer und Herodes' des grossen? (Mainz am Rhein, 1999; subsequently published in Hebrew in 1999 and English in 2001 by Yad Ben Zvi, Jerusalem), presents a detailed description of the various palaces built in Judaea by the Hasmonean rulers and by Herod the Great. His volume Nabatäische Architecture: insbesondere Gräber und Tempel (Mainz am Rhein, 2003) is an up to-date survey of Nabataean architecture, concentrating on tombs and temples known in Nabataea, which, according to his understanding, have much in common and further illuminate other aspects related to the Nabataean realm. After devoting his life to Herod's colossal monuments, he published his comprehensive study, The Architecture of Herod, The Great Builder (Tübingen, 2006), in which he discussed the various building projects initiated and sponsored by the king throughout the country. This thorough study will be the basis for all future research on Herod's kingdom, Herodian architecture and the role of this king in shaping the architectural landscape and cultural behaviour of his realm, leaving his mark far beyond his reign and the boundaries of his kingdom.

In his search for the building projects of Herod, Ehud spent several years excavating in Sepphoris, at first with Eric and Carol Meyers and then, beginning in 1990, in an independent expedition of the Hebrew University of Jerusalem. As co directors of that team, we uncovered the city's infrastructure, the bathhouses, the Nile Festival Building and, above all, the synagogue in the summer of 1993. Ehud and I were full partners in the dig, in our subsequent discussions and in the future publication plans, but at one point he decided to leave everything, entrusting all responsibilities to me, so that he could return to his true passion — the Herodian realm. He conducted several excavations at Jericho and Masada and renewed his excavations at Herodium, where he uncovered Herod's tomb and other adjacent buildings.

Wishing to present Herodium to the public, Ehud returned to the site to discuss a future exhibition at the Israel Museum that would be dedicated to Herod's last days. As in a Greek drama, everything was proceeding in a positive direction; the gods did not interfere and everything seemed calm — until the main protagonist suddenly collapsed and fell to his death. In the small theatre at Herodium, between the track of the hippodrome where Herod's funeral took place and the King's monumental tomb seen from afar, the curtain dropped on the leading performer, leaving the audience in shock. Ehud passed away just a few days later, after tragically tripping and falling into the theatre. Through Ehud Netzer's scholarly achievements, excavations and publica tions, and especially through my fond memories of him as teacher, colleague and true friend, his spirit and legacy will remain with us forever. יהי זכרו ברוך