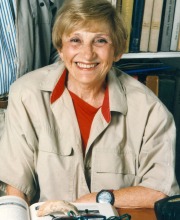 "Professor Trude Dothan, among the pantheon of Israeli archaeologists whose intensive research in Philistine and Mediterranean studies dramatically broadened the scope of Israeli archaeology, passed away after a long illness on January 28, 2016. Trude’s groundbreaking scholarship and her professional leadership role at a time long before there was a strong woman’s movement had a profound and lasting impact not only on her students and colleagues, but on the discipline of the Archaeology of ancient Israel.

Born in Vienna in 1922, Trude came to Palestine with her parents in 1925. Beginning her archaeological studies at the Hebrew University in the 1940s, she earned an M.A. and then her Ph.D. writing on The Material Culture of the Philistines. Published in 1982, it remains one of the primary resources for the study of the Philistines and other Sea Peoples. Appointed the Eliezer L. Sukenik Professor of Archaeology in 1985, Trude also was the first director of the Philip and Muriel Berman Center for Biblical Archaeology at the Hebrew University.

Trude was awarded the Israel Prize for Archaeology and the Israel Museum Percia Schimmel Award for Distinguished Contributions to the Archaeology of the Land of Israel. The volume Mediterranean Peoples in Transition: Thirteenth to Early Tenth Centuries BCE was published in her honor, and The Trude Dothan Lectureship in Ancient Near Eastern Studies, a series of presentations by renowned international scholars, was endowed by the Dorot Foundation at the Albright Institute.

This is the way most of us will remember Trude—for her many contributions to the field of Israeli archaeology. As for me, during the more than 30 years of working closely together, I came to appreciate Trude’s more personal nature: her friendship, her ability to relate to people and her sense of humor. Trude had her own way about her, and there were so many shared experiences that reflect her unique nature, joy of life, infectious enthusiasm and passion for her work. To her two sons, Dani and Uri, and the Dothan family, you should know that Trude will be sorely missed. And I shall have lost an endearing partner whose presence will ever be with me, especially in the work to come in our joint Miqne publications.
May her memory be blessed.
Yehi zichrah baruch."
Written by Seymour Gitin, the Dorot Director Emeritus of the W.F. Albright Institute of Archaeological Research in Jerusalem in Biblical Archaeology Daily