In May 2007, a unique museological experience was introduced at Masada. Combining archaeological artifacts and a theatrical atmosphere, together with accompanying radio play and audio explanations, it creates a meaningful guided tour of the Story of Masada.

The archaeological artifacts, dug at the site of Masada between 1963 and 1965 by the Hebrew University of Jerusalem under the direction of the late Professor Yigael Yadin, are exhibited in nine theatrical scenes. The artifacts focus around three main themes: Herod, the Rebels, and the Roman Army.

In each of the scenes, an implied dialogue takes place between the artifacts and the setting. The visitor moves through the designed spaces with earphones and listens to informative explanations of what lies before them, including a dramatic presentation that will help him or her "see and feel" the story behind the archaeological finds. 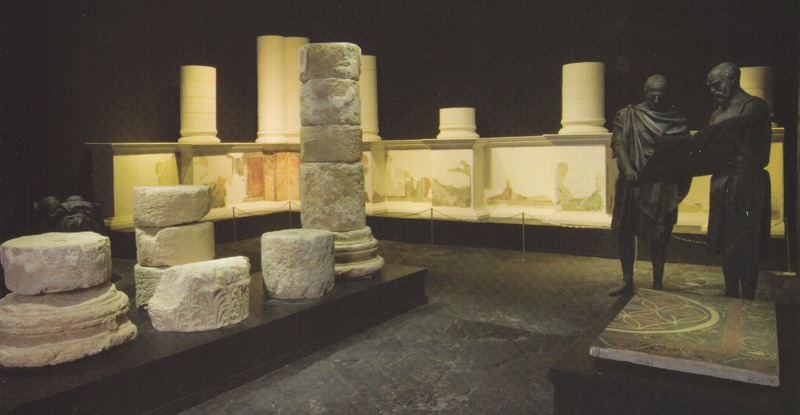 Original frescoes and columns from the Northern Palace and a mosaic floor fragment from the Western Palace. 1st century BCE (photo: Courtesy of the Israel National Parks Authority)

So, for example, we find a stone table and luxurious tablewares - together with inscriptions on amphoras specifying the types of wine and a variety of delicacies that graced King Herod's table - against the background of a banquet scene held in a Roman villa. In another space describing the living quarters of the rebels in the casemate walls, we find simple cooking vessels, remnants of clothing, straw baskets, brushes, and Hebrew inscriptions that bespeak the daily life of the Jewish fighters and their families at Masada. In yet another area, Latin inscriptions and objects associated with the Roman army are exhibited against the setting of an army camp of the Tenth Roman Legion that laid siege to Masada.

The audio explanations and the radio play will allow the visitor to connect the artifacts with the backdrop and will make him the narrator's confidant throughout the telling of the story. This is first and foremost the historical account that has come down to us through the writings of Flavius Josephus.

The last space in the museum is dedicated to the excavator of the site, Professor Yigael Yadin, and concludes the fascinating story of Masada that has been presented between two poles - beginning with the narrator-historian Flavius.

Designed by Eliav Nahlieli and the Programa1 team.

The Yigael Yadin Masada Museum Gift of the Shuki Levy Foundation, at the Israel Nature and Parks Authority