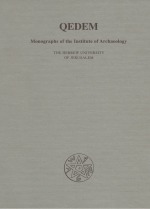 The excavation of Tell Qasile, situated on a bank of the River Yarkon in north Tel Aviv, was resumed in 1971-1974. Area C proved to be the sacred area of the Philistine town, offering a unique opportunity to excavate a Philistine sanctuary that underwent a series of architectural changes in Strata XII-VII of the late 12th-late 10th centuries BCE. A thorough description of the architectural remains, with numerous plans and sections, is followed by a comparative study of temples in Syria-Palestine, Cyprus, and the Aegean. The rich assemblage of exotic cult objects, including anthropomorphic and zoomorphic vessels, masks, stands, kernoi and figurines, is presented in detail and their cultural connections are studied. Qedem 20 (1985) treats the pottery and small finds from Tell Qasile and discusses the chronological, cultural, and historical conclusions to be drawn from the excavations at the site.