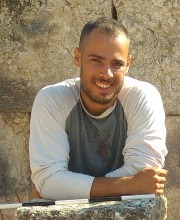 M.A. Thesis Title: Animals in private and public spaces: the case of Tiberias during the early Islamic period, 7th to

Abstract: Tabariya, the capital of Junnd al-Urdun (Jordan Province) since the 7thcentury, located in the west coast of the sea of Galilee, served as a fundamental metropolis in the fertile crescent between the Mediterranean Sea and Damascus. Since its foundation in the early first century, the city continued to flourish during the geo-political changes until the 12thcentury, when the Crusaders moved the city center to the north ( Old city/Ottmanid City). Archaeological excavations in the last two decades have revealed the Roman, Byzantine and Early Islamic city, including monumental public buildings, such as the city gates, Cardo street, perimeter Wall, Theater, Bath house, Churches and Mosque. The mosque, which served as “Jamii” (Friday mosque) is located between the east and west cardos, main streets with shops. The mosque and its purity may be offended due to the shops and their leftovers, which may be the reason why the prestigious building is bound by open dirt areas. Tiberias mosque is a rare case due the fact that it is the only mosque in to be excavated in the 21th century and dating back to the early Islamic period (7th till 12th century). This mosque is the most valuable building concerning the daily-life religious, cultural and political affairs. Research on any factor relating the mosque is bound to lead to new, yet unknown, information. The archaeological excavation directed by D. Katia Cytryn since 2009 revealed private homes south to the mosque (Area M4) and shops west to the mosque (Area M1), which share the same wall. In both areas a large quantity of zoological finds, mainly animal bones were collected and are yet to be analyzed.

It should be noted that live animals or animal bones are considered as impure in Islam. Thus, monumental mosques since the 9th century in Iraq and Egypt have a Zyiadaa, an extra frame enclosing the mosque, to keep it pure and clean. The zoological finds found in context with the Tiberias mosque, also Known as Masjid al-Yasmin (Jasmin Mosque), may therefore reveal the nutrition, economical level, sanitation and mobility of people at the city center. This type of study has not been conducted before.